Stephen Colbert brought out his “Figure-It-Out-A-Tron” – aka a chalkboard – on The Late Show on Monday, using it to both demonstrate the breadth of questionable connections between President Trump‘s administration and the Russian government and to make several pee jokes. 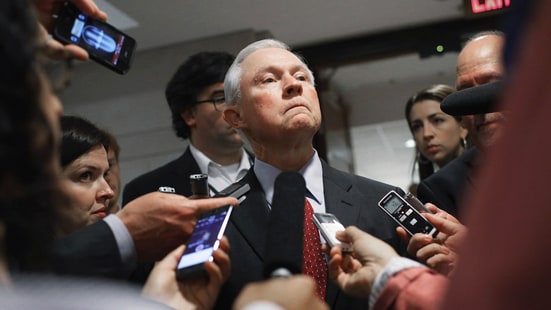 Colbert seemed determined to remind viewers of the extent of the evidence linking President Trump’s associates to figures in the employ of Vladimir Putin. After briefly explaining the connection between, for example, former national security adviser Michael Flynn and Russia, Colbert drew the letter P next to Flynn’s name on the chalkboard. “P stands for Putin, and these Putin P’s are all raining down directly at Trump,” the late-night host observed.

This was a barely veiled reference to the “Golden Shower” allegations – unverified rumors that President Trump paid prostitutes to urinate in front of him in Moscow – which flew around the internet in January. Once Colbert showed the audience where this segment was going, he hammered home the point as they laughed approvingly. “[President Trump] is drowning in P, which again, stands for Putin,” Colbert continued. “Just drink it in.” And before cutting to commercial: “This could really leave a stain on his legacy.”

Urine jokes aside, Colbert urged citizens to ignore the latest round of Twitter allegations from President Trump, who accused President Obama of tapping his phone but offered no evidence to support this assertion. “A lot of people say [the accusation] was to distract from recent bad press: [President Trump]’s like a magician, misdirecting your attention with sleight of hand,” Colbert said.

Then he added another President Trump dig that dates back to election season: “We all know Trump has the slightest of hands.”