Fresh off announcing his new LP All-Amerikkkan Bada$$, Joey Bada$$ has dropped the new video for “Land of the Free.” 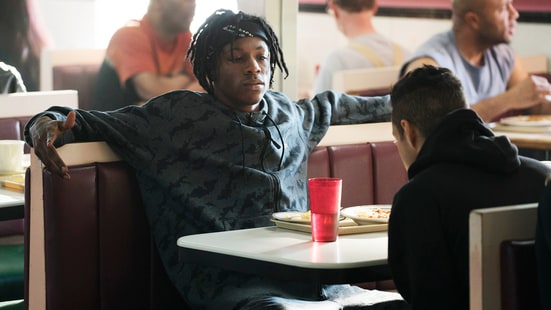 In the powerful, political video, Bada$$ and a group of African-American men in restraints stand resolutely in the desert while a gaggle of white businessmen, police officers, and politicians open fire on them.

“Sorry America, but I will not be your soldier / Obama just wasn’t enough, I need some more closure / And Donald Trump is not equipped to take this country over,” Bada$$ rhymes on the track. “Still got the last names of our slave owners / And the land of the free is full of freeloaders / Leave us dead in the street to be their organ donors / They disorganize my people, made us all loners.”

“We can’t change the world unless we change ourselves,” the rapper adds, waving around the red, white and blue bandana American flag that also adorns the All-Amerikkkan Bada$$ cover.

Later in the Nathan R Smith-directed video, the KKK are shown burning a cross and lynching in the desert while a heavy rain falls. The KKK remove their hoods to reveal that they are the police officers that opened fire earkier in the video.

That powerful imagery is juxtaposed with idyllic footage of Bada$$ innocently running around a grassy mountainside with African-American kids and rapping “Land of the Free” to them like it’s a bedtime story.

All-Amerikkkan Bada$$, due out April 7th, promises to address “the current state of the world in 2017 from his point of view.” The album is available to preorder now.