OK Go and the Go-Go’s partnered on the latest installment of Jimmy Kimmel Live‘s “Mash Up Mondays” for an energetic performance that mixed the former’s “Here It Goes Again” with the latter’s “Our Lips Are Sealed.” 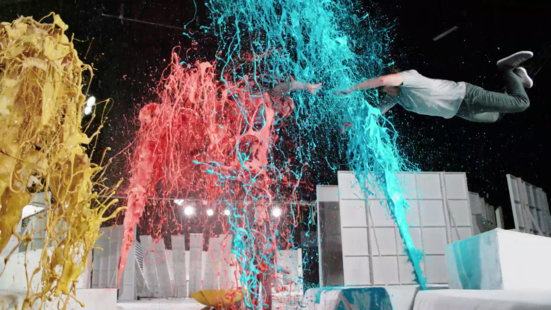 The so-called “OK Go-Go’s” began their mash-up alternating between the verses of the two songs, but slowly brought the power pop anthems together. By the bridge, OK Go’s Damian Kulash and Go-Go’s singer Jane Wielding were singing interweaving vocal lines from their respective songs before the whole outfit came together for a final, seamless barrage of monster hooks.

Kimmel‘s latest slate of “Mash Up Mondays” opened with Lady Antebellum and Bell Biv Devoe performing the former’s “Need You Now” with the latter’s “Poison.” The series will continue next week with Ice-T and T.I. performing as “Ice-T.I.”

OK Go released their most recent album, Hungry Ghosts, in 2014. The Go-Go’s reunited last year for a summer farewell tour, but the group is still working together on a new jukebox musical, Head Over Heels.