Colin Kaepernick is expected to end his protest national anthem protest next season by choice. Megan Rapinoe, on the other hand, will no longer be able to take a knee during “The Star-Spangled Banner” because of a new policy adopted by the U.S. Soccer Federation.

The regulation, which was revealed at U.S. Soccer’s Annual General Meeting on Saturday, now requires national team players to “stand respectfully during the playing of national anthems at any event in which the Federation is represented.” The move is in response to Rapinoe taking a knee during the national anthem of at least two games last fall for reasons similar to Kaepernick. 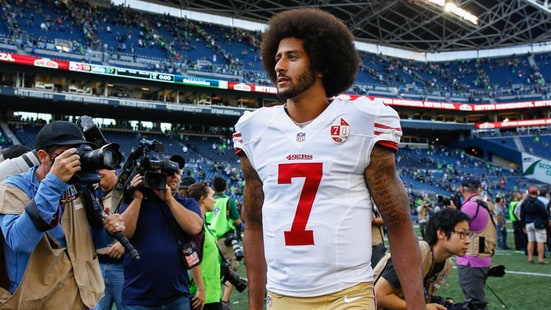 This shouldn’t come as a surprise to anyone who followed the back and forth between Rapinoe and U.S. Soccer last year. It was reported that she was pressured not to kneel before a friendly match against Thailand in September, but Rapinoe continued her protest anyway. In response, U.S. Soccer released a statement saying: “As part of the privilege to represent your country, we have an expectation that our players and coaches will stand and honor our flag while the national anthem is played.”

U.S. Soccer Foundation Sunil Gulati also alluded to changes in an interview with FourFourTwo in November by saying Rapinoe has “obligations to putting on a national team uniform.”

Former member of the U.S. national soccer team were quick to weigh in. Alexi Lalas doesn’t think the rule goes far enough, and believes U.S. Soccer should even take it a step further by requiring national team players to stand for the national anthem and sing the national anthem. Jill Ellis, who is the head coach for the women’s team, said “I’ve always felt that that should be what we do to honor the country and have the pride of putting on a national team jersey.”

Rapinoe has yet to respond.

It will be interesting to see how other sports leagues in the United States react to this new policy. Prior to the 2016-17 NBA season, Adam Silver said he wants to see players continue to stand for the national anthem because he thinks it is “the appropriate thing to do.” A number of teams stood and interlocked arms for the national anthem during preseason games, but there has been little-to-no controversy otherwise in other major leagues. The NFL, of course, had many players join Kaepernick in his protest last season. Seattle Seahawks wide receiver Doug Baldwin even told Bill Simmons that he knows of several NFL owners who told their players to “not do specific things” in regards to the national anthem.

It remains to be seen what the penalty will be for anyone who violates the rule moving forward, but Gulati said they will be addressed if and when they happen.