The late critic Roger Ebert used to cite something he called “Brotman’s Law,” which essentially stated that if nothing interesting had happened within the first 20 minutes of a film, nothing was ever going to. That rule can’t really be applied to The Walking Dead: It has an odd habit of springing its nastiest surprises at the end of hours that are otherwise talky, dry, and stubbornly incident-free. All of which means that two-thirds of the way through this week’s episode – “Say Yes” – after a long stretch of not-much-to-write-home-about, when it suddenly looks like Rick has been felled by walkers, and that a grief-stricken Michonne is going to let herself get eaten, well …. 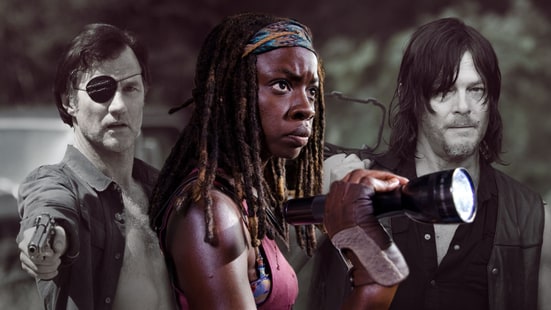 From survivors to Saviors, the Governor to Negan – the greatest heroes, villains and everything-in-between of AMC’s hit zombie-horror show

Oh, who are we kidding? There was never any reason to worry. This show’s not going to kill off its main character in some random episode in the middle of some random season; and it would definitely have been too dumb of a way for our katana-wielding badass to die, committing suicide because of a momentary misapprehension. At the moment that both of them ended up okay – after a cool last-minute escape involving a sword flung through the air and then immediately put to use on a dozen ghouls – it was obvious that this week’s outing wasn’t going to spring any surprises. Once that was clear, it was time to ask: What exactly were we supposed to get out of all this?

If you think of this chapter strictly in terms of what might be excerpted in some future “previously on The Walking Dead” montage, there are only two scenes worth remembering. In one, Rick delivers the cache of guns and ammo that he and Michonne nearly lost their lives procuring for the Scavengers, and the junkyard-dwellers’ leader Jadis responds with her usual quirky terseness, “Need nearly twice.” In the other, Rosita swallows her pride and heads to the Hilltop Colony to ask her former romantic rival Sasha for help in killing Negan with one of their fancy new weapons. She signs on immediately, under one condition: “I get to take the shot.”

When it comes to this season’s larger plot, here are the takeaways: The Alexandrians are now halfway to their goal of assembling enough of an arsenal to recruit the Scavengers to their cause; and an impatient Rosita is about to embark on a guerrilla mission that could potentially ruin all of Rick’s plans. All told, that’s really not a lot of developments for a series so sprawling – and especially not for an episode written by Matthew Negrete and directed by Greg Nicotero, key members of this show’s creative A-team. For them, “Say Yes” appears to be more about establishing everyone’s rationale for actions yet to come. Walking Dead fans know what that means. Are you ready for some conversations? Each more earnest than the last?

Even though Rosita has been itching for battle for most of this season, the writers apparently felt she couldn’t make her big decision until she spent a few more scenes openly stewing. So we get to watch her have a long chat with Father Gabriel, where she criticizes him for urging her to wait to take on the big bad, and listens to his fairly zen reply that there’s no point in dwelling on mistakes that can’t be erased. Meanwhile, Tara has a little talk of her own, with Rick’s uncomprehending toddler daughter, as she tries to convince herself that there’s no reason to tell anyone about the well-armed but effectively closed-off Oceanside community. It’s only after the Scavengers demand more guns that she apparently has a change of heart, and lets our fearless leader know that she may have some helpful intel for the group.

The rest of the episode is less about immediate motivations and more about how the deeper connection between Rick and Michonne has become an anchor for them – in both the positive and negative senses of the word. The grand gesture of romantic doom that our heroine almost makes when she thinks her man has been devoured ends up becoming his cue to let her know that when he imagines a brighter future, he pictures her by his side. In that same speech, he also warns her that in the fights on the horizon, either of them (and any of their loved ones) could die. They can’t let the fear or the potential emotional devastation of that derail their mission. 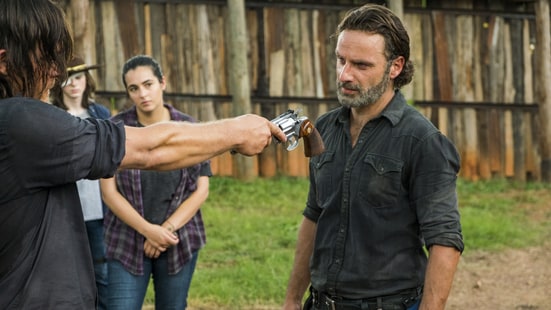 Ultimately, this week becomes The Rick & Michonne Show, as they scrounge for supplies and have hot sex between awesome-looking zombie-kills. And that’s fine, as far as it goes. They’re a likable pair. Plus Nicotero takes good advantage of the visual possibilities of the location where they spend most of this hour: a military base that was hosting some kind of traveling family fun-fair when everything went to hell.

But after we’ve watched these two savor pouches of MRE chili-mac by candlelight, and have seen them slaughter walkers from under the shadow of a ferris wheel, it’s hard not to wish that these more entertaining scenes had been worked into an episode with lasting impact. Michonne keeps suggesting that they should probably go home, and Rick keeps answering that he’d like “just a little more time.” Which is sweet, because there’s something special about this fantasy of two passionate lovers off on their own, relying on each other to survive in a world gone mad. But to be honest, his plea also sounds a bit like the voice of the producers, admitting that they need to kill another hour before they can get back to the parts of the story that matter.

Previously: Revenge of the Nerd