The remains resting in H.H. Holmes’s coffin is being removed from its grave, and a team of researchers are hoping to find out if the they indeed belong to America’s first serial killer. Last week, Philadelphia-based analysts started exhuming the body of what they presume to be Holmes, buried in Holy Cross Cemetery. He was supposedly executed by hanging just nine days before his 35th birthday, on May 7th, 1896, but rumors have persisted since his death that he actually escaped. Now, his descendants want to put a stop to this story once and for all. 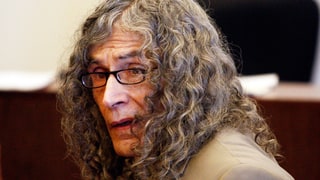 Herman Webster Mudgett, a charismatic and handsome doctor from New Hampshire who changed his name to H.H. Holmes as an homage to Sherlock, had already abandoned his first wife and child in the Northeast when he arrived in the outskirts of Chicago, fleeing accusations of fraud, poisoning and murder. In 1885, he slithered his way into the town of Englewood, Illinois, and began working in a drugstore at 63rd street and Wallace avenue. He swindled the owners, bought property across the street, and drew up blueprints for a three-story building to include a drugstore, apartments and retail space – as well as trap doors, airtight rooms and a basement designed to dispose of human bodies. As construction continued, he fired workers systematically to make sure no one knew the full extent of his plan. By 1892, his Murder Castle, as it came to be known, was complete, just as the grounds of nearby Jackson Park were being prepared for the Columbian Exposition world’s fair.

The Murder Castle’s first floor included the drugstore, while the third was apartments. The second floor offered tourists several dozen asbestos-packed, soundproof rooms designed as labyrinths of disorienting doorways and staircases including chutes that dropped guests into a basement complete with a acid vats, quicklime pits and a crematorium. In Erik Larson’s best-selling nonfiction novel The Devil in the White City, the author describes how Holmes targeted women who had come to Chicago to work. “Jack the Ripper had found [victims] in the impoverished whores of Whitechapel,” he wrote. “Holmes saw it in transitional women, fresh clean young things free for the first time in history, but unsure of what that freedom meant and the risk in entailed.”

After the fair closed in October 1893, Holmes fled Chicago creditors and a fire insurance company for a cross-country scamming trip. He was finally caught, charged and convicted two years later of the murder of his right-hand-man, Benjamin Pitezel. He was arrested in Boston and hanged for his crime in Philadelphia. It has been suggested that Holmes had over 200 victims, though he confessed to 27 and modern experts believe that figure to be closer to nine. While incarcerated, he wrote the 256-page account, Holmes’ Own Story, in which he tried to convince the public of his innocence, before he was convicted. “I could not help the fact that I was a murderer, no more than the poet can help the inspiration to sing,” he wrote.

Given his history as a skilled con-man, rumors emerged soon after his death that Holmes managed to trick his way out of his own hanging, and escape to South America. Here, what we know about Holmes’s exhumation.

Why is he being exhumed?
Before his execution, Holmes requested a “double-deep coffin” covered with wet cement to prevent the remains from being “stolen and dissected,” according to CrimeFeed. At the time, the Chicago Tribune wrote that Holmes’s execution was “frightfully scientific, methodical and expeditious,” according to NBC Chicago. But, as Holmes expert Matt Lake recently told NBC Philadelphia, that was an immediate theory that Holmes faked his own death. “It’s very tempting [to believe it,]” Lake said. “Because this guy was a consummate trickster!”

Such conspiracy theories involved Holmes bribing officials at the former Moyamensing Prison in Philadelphia to substitute a cadaver for his own corpse, so he could escape death and flee to South America. “Within two hours of the hanging an undertaker’s wagon containing a casket drove out of the prison yard,” according to a 1898 report from the Chicago Daily Inter-Ocean. “That casket was supposed to contain the body of Holmes. Instead, it contained Holmes living.”

Robert Lattimer, once a janitor at the Murder Castle, claimed in 1898 he had seen letters proving that Holmes conned his lawyer, priest and jail officials into burying a dead man in his place, according to Adam Selzer, an author and historian in Chicago. Holmes claimed he’d killed Lattimer, but the former employee was very much alive when he made these accusations – though never produced the letters. He did, however, insist that his former boss escaped to a New York hotel, before moving onto a coffee farm in San Parinarimbo, Paraguay. Lattimer’s story – like many others’ at the time – was full of holes. For example, the South American town never existed.

Who asked for the exhumation?
The query came from his own family. Holmes’ great-grandchildren, John and Richard Mudgett and Cynthia Mudgett Soriano, petitioned the Delaware County Court to exhume the body last year. Court documents say that family rumors include stories that Holmes “managed to escape some subterfuge and that someone else was hanged and buried at the grave site,” according to NBC Philadelphia.

What will they find?
On March 9th, the Delaware County Court granted permission for the exhumation of Holmes’s body, and tasked the University of Pennsylvania’s Anthropology Department with performing DNA analysis. But the court order states that the remains will be “reinterred in the same grave site” in the cemetery “regardless of whether or not those remains are determined” to be Holmes’, according to NBC Chicago. The court ordered that “no commercial spectacle or carnival atmosphere shall be created either by this event or any other incident pertaining to the remains” – a note to prevent the reoccurrence of tourist attractions experienced at the Murder Castle before it was burned down. However, just getting his body out of the ground might prove to be an ordeal: Holmes’ casket was buried and covered in seven, 3,000-pound barrels of cement – a measure to “ensure his body against the vandalism or scientific curiosity of ghouls,” according to the Chicago Tribune.

If it’s not him, then what?
The exhumed body, whether Holmes’ or not, must be returned within 120 days, according to the court order. If DNA testing shows that the body is someone else’s, the great-grand children will have to pay for interment and property damage.

Though finding Holmes’ body in his grave might put an end to such conspiracy theories, we will never know his murder count. Despite his lone conviction and varied writings, Holmes recanted his confession on the gallows and left law enforcement and the families of those who disappeared during the fair wondering just how many people he lured into his version of Hell.

Is Holmes due for another media craze?
Holmes’s alleged escape to South America was “quite a popular story at the time” of his death, Lake told NBC Chicago. “A cynical person might say this was just designed to sell more newspapers, and it did sell newspapers!” More recently, Larson, a National Book Award Finalist, re-introduced Holmes’s story into mainstream culture. Seven years ago, Leonardo DiCaprio purchased the book rights and since partnered with his longtime director Martin Scorsese to work on the script to give us an on-screen rendering of the “Monster of 63rd Street,” though nothing has come of it. In 2015, Evan Peters played Holmes re-imagined in Los Angeles during the 1920s, on FX’s American Horror Story: Hotel.