Two unlikely sets of performers met up for “Mashup Monday” on Jimmy Kimmel Live, as Lady Antebellum joined Bell Biv DeVoe for a performance that mixed the latter’s 1990 smash “Poison” with the former’s 2009 smash “Need You Now.” 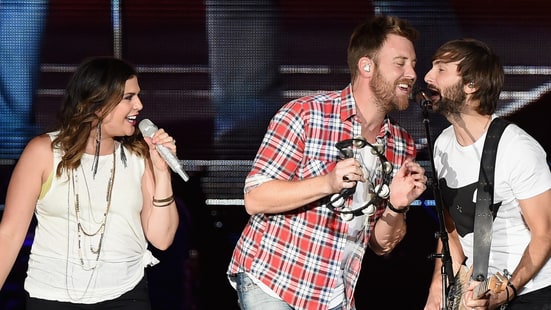 Lady Antebellum lead the performance, harmonizing their way through a dramatic, slow interpretation of the “Poison” chorus while wearing denim jackets inspired by Nineties hip-hop. Charles Kelley gets the money line – “Never trust a big butt and a smile” – as the pistol crack drums of the original signal party time and Ricky Bell, Michael Bivins and Ronnie DeVoe join them onstage for their enduring example of a song that is, in their words, “mentally hip-hop, smoothed out on the R&B tip, with a pop feel appeal.”

The performance is mostly centered around “Poison,” with BBD’s signature dance moves and Lady A’s Hillary Scott interjecting lines on the highest parts. But after a quick, off-the-cuff rap, the music pivots to a punched up version of their hit “Need You Now,” where they linger just long enough for one verse and chorus. The somber mood of this section is a remarkable contrast from the energy of “Poison,” but at least shares a similar vision of love and its inherent risks. As quickly as they arrive, the performers return to the irresistible beat of “Poison” to put an exclamation point on the ending.

Lady Antebellum will release their sixth studio album Heart Break on June 9th and hit the road May 26th for their You Look Good World Tour with Brett Eldredge and Kelsea Ballerini. Their current single is “You Look Good.”

Bell Biv DeVoe released their latest album Three Stripes in January and their next live date is the 12th Annual Freestyle Festival in Long Beach, California on April 22nd.