“I’ve never played this, so Miranda bear with me, but this is a great song. Even if it is weird that a guy is holding shoes in his hand at 7 a.m.,” Keith Urban jokes of the morning-after exit, before launching into a cover of Miranda Lambert’s single, “Vice.” Shot backstage at Nashville’s Grand Ole Opry for the Radio Replay series, the black-and-white video complements Urban’s pensive vocals. Adding to the cover’s gloomy spirit is the way his guitar slips ever-so-slightly out of tune – an unintentionally fitting touch for the tune’s theme of shrugging self-destruction. 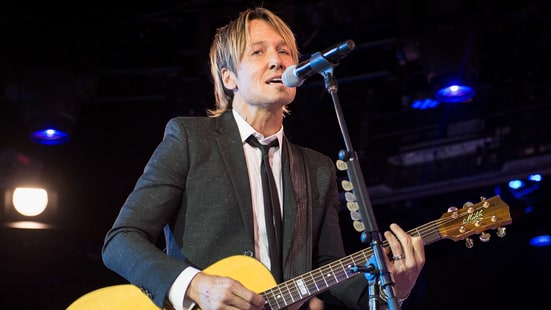 No stranger to female inspiration and collaboration, Urban and Lambert have previously duetted on chart-topping hit “We Were Us,” from 2013’s Fuse. Currently his latest single off of 2016’s Ripcord album, “The Fighter,” stacks him opposite Carrie Underwood. The pair have performed the poppy anthem together at various live shows, including a glitzy rendition at the 2017 Grammys.

After a brief break from the road, Urban’s Ripcord World Tour picks back up on Saturday, May 27th, in Indianapolis, Indiana. Currently, Urban has the most ACM Awards nominations for the upcoming April 2nd show with seven, including his first Entertainer of the Year nod since 2010.