Nick Cave and the Bad Seeds will reflect on their 30-year tenure together with Lovely Creatures – The Best of Nick Cave & The Bad Seeds 1984-2014. 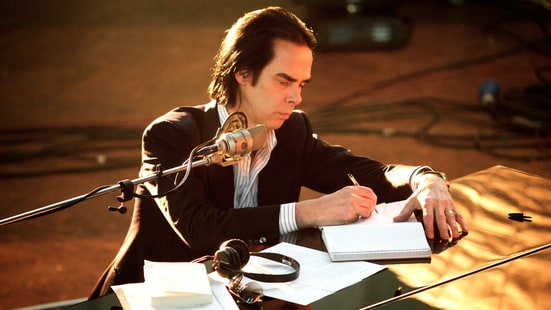 “There are some people out there who just don’t know where to start with The Bad Seeds. Others know the catalogue better than I do,” Cave wrote of the collection, which arrives May 5th. Preorder Lovely Creatures at Cave’s website.

“This release is designed to be a way into three decades of music making. That’s a lot of songs. The songs we have chosen are the ones that have stuck around, for whatever reason. Some songs are those that demand to be played live. Others are lesser songs that are personal favourites of ours. Others are just too big and have too much history to leave out. And there are those that didn’t make it, poor things. They are the ones you must discover by yourselves.”

The collection will come in a variety of formats, like standard 2CD with 21 tracks, a triple vinyl LP and a deluxe 3CD/1DVD package armed with 45 songs and a two-hour DVD filled with “rare and unseen footage.”

The most noteworthy is the Super Deluxe Limited Edition, which comes with “a 256 page hardcover book containing original essays, candid and personal photos taken by the band, family and friends, and reproductions of band memorabilia,” along with the 3CDs and 1DVD.

In addition to the trailer for Lovely Creatures, Cave also penned an afterword about the greatest hits package. “Lovely Creatures was initially scheduled for release in the autumn of 2015. Thirty years or so had passed since the band had formed and much had happened during that time – the band morphing into as many versions of itself as there were albums to reflect this. It felt, to me, a good time to pay tribute to this unique creation,” he wrote.

However, the singer and the Bad Seeds reentered the studio following the death of Cave’s son Arthur, resulting in 2016’s Skeleton Tree and the heartbreaking making-of documentary One More Time With Feeling.

“Whatever Skeleton Tree became, it was a wholly necessary addition to the band’s story,” Cave continued. “Lovely Creatures lost, for a time, its place in the narrative. Now, it seems the time is right to recognise and celebrate the Bad Seeds and their many achievements. So here, at last, it is: Lovely Creatures.”