Mastodon have released “Andromeda,” another deftly heavy number from their upcoming LP, Emperor of Sand. 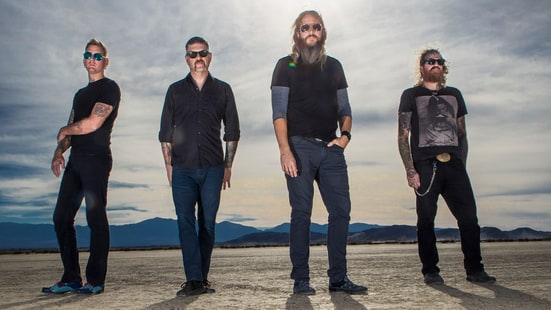 Among a flurry of urgent, slithery riffs, the group laments the fleeting nature of time, ending with screams about “chronic delusions with caustic solutions.” Throughout, the band members trade off affecting vocals ranging from operatic to gritty.

It’s a tense listen that plays into the overall concept of the record. “Time is a very big theme of the album,” drummer-lyricist Brann Dailor recently told Rolling Stone. “How much time do we have left? What are we doing with our time?”

The band, which previously posted the songs “Show Yourself” and “Sultan’s Curse” from the album, teamed again with producer Brendan O’Brien, who helmed the band’s 2011 outing Crack the Skye, for the follow-up to their 2014 album Once More ‘Round the Sun. The record is due out March 31st.

The band will hit the road this spring for a 30-date tour, with support from Eagles of Death Metal and Russian Circles.