Originally taped last spring, the newest episode of Walking the Floor breaks away from the podcast’s Americana format, focusing instead on songwriting duo Davey Havok and Jade Puget. As members of AFI and Blaqk Audio, the two have spent the past two decades leaving their stamp on the worlds of punk, post-hardcore and electronica, blurring the lines between all three genres. 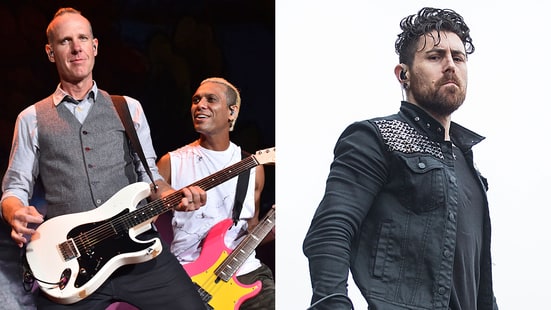 Host Chris Shiflett, who grew up within three hours of the bandmates’ stomping grounds in northern California, talks to the pair about the Bay Area’s music scene, where AFI began their rise from punky nobodies to mainstream chart-toppers. Along the way, the three also talk about songwriting, W.A.S.P.’s expletive-ridden song titles and their own fans’ zealous support. In keeping with Rolling Stone Country‘s Monday morning tradition, we’ve compiled several highlights from the conversation below, followed by a full stream of the weekly podcast.

Want to be in a successful electronica band? Make sure your laptop is fully charged before your shows.

“We’ve only had our computer crash one time,” remembers Jade Puget, who pulls triple-duty as Blaqk Audio’s keyboardist, producer and primary songwriter. “With electronic music, pretty much everything goes away. If a guitar comes unplugged [during a rock show], everyone’s still playing. But with us, there’s nothing.”

“It was a really great community,” Havok says of the long-running club, which became a springboard for SoCal bands like Green Day and Operation Ivy. “Jade and I were going to Gilman Street before we even lived in Berkley. We’d drive to go to shows there, because so many great bands came and it was such a great community, and it was run by the kids. They’d let you work there, rehearse there. It was really supportive.”

Like many of the band’s biggest fans, Havok’s father sports an AFI tattoo.

“In the early days, AFI would rehearse in my parents’ living room sometimes,” Havok remembers, “and when we were rehearsing to record Answer That and Stay Fashionable, I remember Adam’s drums staining the carpet, and my dad would come in and sing backup vocals. He really loved it. His first and only tattoo is an AFI tattoo he got when the Sing the Sorrow record went gold. Then when it went platinum, he got more added to it. He was a really big supporter. Still is.”

Metal magazines began giving AFI’s albums glowing reviews during the turn of the century – which was odd, since Puget, the group’s main songwriter, is the only bandmate who didn’t grow up listening to metal.

“Metalheads were as bad as jocks for us,” he says. “Metalheads would try to fight you as much as jocks – in our town, at least. So I [didn’t] wanna listen to what they’re listening to. That’s the enemy.” When it came to bands to W.A.S.P., though, Puget and his childhood friends made an exception. “When you’re a kid and you see metal records like ‘Fuck Like a Beast,’ of course you’re gonna get that,” he clarifies.”

Do you think you’re AFI’s most dedicated fan? Think again.

“I remember someone saying they had broken out of jail to see us once,” Havok recalls.

What separates Blaqk Audio from other electronic bands? Keyboard tones from the Eighties, as well as a more traditional approach to songwriting.

“EDM is such a huge thing now,” Puget says, “and you don’t really wanna sound like that and use all those sounds. We’ve been around for 15 years now, so if we try to jump on that bandwagon, it’s just gonna seem false. I love those sounds for New Order and Depeche Mode. As far as the songwriting. . .if you listen to current electronic music, it’s not in the traditional song form, which is verse chorus middle eight, chorus. But that’s how we do it. We write in a very song-oriented form, and we have a singer. So that’s why we’re a lot different than those bands.”