The Trump administration unveiled its revamped travel ban on Monday. “The principles of the executive order remain the same,” White House Press Secretary Sean Spicer told reporters at a briefing after Trump signed the new order. The groups suing the government over the ban, which they say still discriminates against travelers on the basis of their religion, would agree. 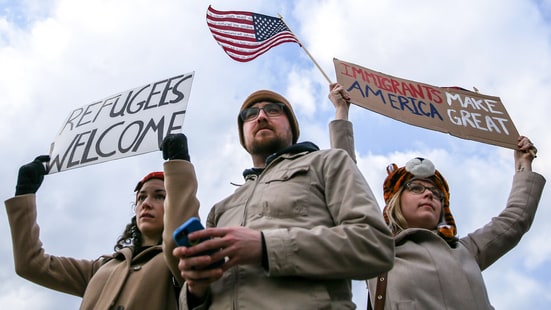 Here are the major differences between the new ban and the old one.

Iraqis will not be affected
The revised order singles out six countries – Sudan, Syria, Iran, Libya, Somalia and Yemen – rather than the seven originally named. Iraq was removed from the list, according to the Department of Homeland Security, after the government pledged to “increase [the Iraqi government’s] cooperation with the United States in the vetting of Iraqi nationals and as such it was determined that a temporary suspension is not warranted.”

Green card holders are exempt
The original travel ban applied even to those travelers who held valid visas to enter the United States – reportedly a point of contention between the White House and DHS Secretary John Kelly. The new ban will not apply to those foreign nationals whose visas were issued before the first ban went into effect on January 27th.

“If you have a current valid visa to travel, we welcome you,” Kelly said at an event on Monday. It’s still unclear what that means for the tens of thousands of travelers whose visas were revoked in the immediate aftermath of the first executive order.

The order will not take effect immediately
Unlike the original order, which plunged airports around the country into chaos when it was implemented without warning on a Friday afternoon, the revised order will not go into effect until March 16th. (Back in January, Trump tweeted, “If the ban were announced with a one week notice, the ‘bad’ would rush into our country during that week. A lot of bad ‘dudes’ out there!”)

Religious minorities are no longer exempt
The original executive order included language that provided exceptions “when the person is a religious minority in his country of nationality facing religious persecution.” Because all seven original countries were Muslim-majority nations, that language was widely interpreted as a loophole exempting Christians from the ban. That language does not exist in the new order, probably because the clause was highlighted by lawyers suing the government as proof the executive order effectively discriminated on the basis of religious.

Syrians will be treated the same as other refugees
The initial travel ban included language that suspended immigration from Syria indefinitely. The revised executive order treats refugees fleeing Syria the same as refugees fleeing other countries. Under the new order, as under the old one, all refugee resettlement in the United States would be suspended for four months. That’s a provision that could threatens the status of many asylum seekers. As the Center for American Progress explains:

“Each step in the screening process has a narrow–and different–validity period, and because these checks overlap, refugees often have less than a two-month window during which all of their security and other checks are valid, allowing them to travel to the United States. … Any delay in allowing a refugee to travel can set off a domino effect of expiring clearances that send the individual back to the beginning of the process.”