David Letterman talked about his long history with Donald Trump (or “Trumpy” as he now calls him), his thoughts on the current late-night game and why Alec Baldwin “deserves a Presidential Medal of Freedom” in a rare interview with New York. 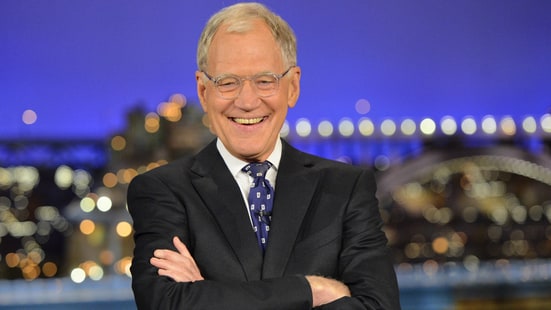 Letterman and Trump have a long history together, as the mogul was a guest of the host’s late-night programs going back to his Late Night era in the Eighties. Trump spent countless evenings seated next to Letterman’s desk in front of a studio audience. “I always regarded him as, if you’re going to have New York City, you gotta have a Donald Trump. He was a joke of a wealthy guy. We didn’t take him seriously,” Letterman said.

“He’d sit down, and I would just start making fun of him,” he added. “He never had any retort. He was big and doughy, and you could beat him up. He seemed to have a good time, and the audience loved it, and that was Donald Trump.”

However, Letterman’s attitude toward Trump changed as the mogul became more politically outrageous, like his dogged pursuit of President Barack Obama’s birthplace, eventually saying that Trump should be “shunned.” Now, Letterman questions Trump’s sanity, as well as whether “the Russians groomed Trump.”

“We know he’s crazy. We gotta take care of ourselves here now,” he said, adding that “comedy’s one of the ways that we can protect ourselves.”

As an example, Letterman praised Alec Baldwin’s Trump portrayal on Saturday Night Live, an impersonation that has repeatedly enraged the president.

“Alec Baldwin deserves a Presidential Medal of Freedom. Sadly, he’s not going to get it from this president,” Letterman said, likening Baldwin to a situation where the hitter in a baseball game is distracted by a dominant pitcher. “Well, that’s Alec Baldwin and Saturday Night Live. It’s distracting the batter. Eventually Trump’s going to take a fastball off the sternum and have to leave the game.”

Letterman also joked about the major players in the Trump administration, calling Steve Bannon “the Hunchback of Notre Dame” and a “white supremacist,” Sean Spicer “a boob who just got out of a cab and now here he is” and that Stephen Miller “is creepy. He fell out of a truck.”

As for whether Trump is being coerced by the Russians, Letterman related the situation to his own blackmailing scandal, although his situation was “instructional league” compared to Vladimir Putin’s “major league” blackmailing.

The former host added, “We don’t need more confirmation that there’s something wrong with Donald Trump. Let’s instead find ways to rebuild what is rational. And the Democrats, goddamn it, get a little backbone, get a little spine. The only person I can trust anymore is Al Franken, who has a great brain and a great heart. I believe what he says.”

As for the current state of late night, Letterman admitted that he never watches his replacement Stephen Colbert or the Late Show‘s competitors.

“People tell me nice things about Seth Meyers, that he’s good and thoughtful,” Letterman said. “I’m aware that Stephen has been able to solidify his position [in the wake of Trump], or — having not seen the show, I don’t know what the situation was prior. I can’t say much about these shows, because I just don’t watch them.”

The very bearded Letterman told New York that he’s enjoying retirement and has no projects on the horizon, but he’s having difficulty adjusting to civilian life, as evidenced by a humorous anecdote about how difficult it was for him to replace a broken shoelace. Letterman also revealed that he turned down a cameo role on Veep because he admittedly can’t act and didn’t want to “ruin” a show he loves.